While it's common knowledge that there is no miracle cure for male or female pattern hair loss, experts are calling the LaserCap the ultimate 'gadget' for your hair.  Cordless, rechargeable, portable, discreet and hands-free, the LaserCap is the most convenient way to apply laser therapy to the scalp and hair.

Thank you to WPLG for making the correction in my name when they re-ran this news story!  This video has information about LaserCap portable low level laser therapy device for hair and scalp.  Bauman patients, Marsha and Billy, were interviewed about their use of laser therapy and LaserCap. Marsha's before and after photos from her laser therapy treatments with LaserCap were featured and high-resolution versions were added to the end of the clip.

The video compares the purchase price of LaserCap with the cost of other low level laser therapy treatments (in office and hand-held).

Bauman Medical Group is proud to be able to offer this breakthrough technology to its patients. Already own a comb or brush laser?  Ask about our 'upgrade' program which enables you to turn in your old, outdated laser for a portable LaserCap with 224 laser diodes.  For more info on LaserCap, visit www.lasercap.info.

For technical questions about the LaserCap or distributor inquiries, please contact doctorb@baumanmedical.com 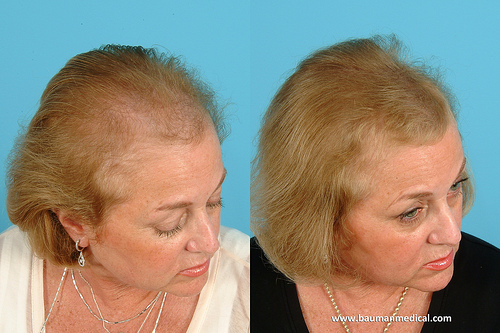 BOCA RATON, Fla. -- Hair loss affects millions of American men and women, and the results can be devastating.

"One of my friends said to me that when you look at a woman the hair is the first thing you see, and that's the image of who you are," said Marsha Schildhorn.

When Schildhorn started losing hair at the front of her head, she turned to Boca Raton hair loss specialist Dr. Alan J. Bauman.

"We talked about a transplant, then he told me to try this new device," said Schildhorn.

The device is a flexible, low-level laser circuit board that fits inside just about any hat. Dr. Bauman calls it the Laser Cap.

"The circuit board is connected to a rechargeable battery pack that fits in your pocket, so you can wear this anywhere," Bauman said.

"I can be driving my car, watching TV, working in the yard, doing just about anything," said Schildhorn.

The cap is built on the same technology of in office laser hoods and at-home hand-held devices.

Billy Carney started using the laser cap after going through a hair transplant.

"I wanted to do everything I could to support hair growth, and my friends say they've really seen a difference," he said.

Schildhorn is happy with the improvement she's seen.

"The entire front of my hair grew in," she said. "It's hard to believe the difference, it's really amazing."

Bauman said there are limitations to what any laser therapy can do.

"If the follicles are dead and gone and there's no hair production, you're not going to see much or a change or improvement from laser therapy," he said.

Copyright 2011 by Post-Newsweek Stations. All rights reserved. This material may not be published, broadcast, rewritten or redistributed

Stem Cells May Hold the Cure for Baldness

TUESDAY, Jan. 4 (HealthDay News/Alan Mozes) -- Common baldness could have its roots in a newly identified stem cell defect, a finding that could potentially lead to new hair-loss treatments down the road, a new study reveals.

Researchers say they discovered that a cellular malfunction short-circuits the process by which hair follicle stem cells turn into hair-producing progenitor cells. That defect, rather than any loss of stem cells themselves, sparks the onset of androgenetic alopecia, the medical term for a type of genetic hair loss that affects both men and women, they report.

In men, this hair loss is commonly known as male pattern baldness, marked by the familiar receding hairline and thinning hair on top of the head -- a condition that sometimes leads to complete baldness. In women, female-pattern hair loss causes the hair to get thinner all over but rarely leads to baldness.
The findings offer "a lot more hope that you could actually get hair to grow in a bald scalp," said study co-author Dr. George Cotsarelis, chairman of the dermatology department at the University of Pennsylvania School of Medicine Cotsarelis.

"Previously we thought the stem cells were gone, and if that was the case it would be very difficult. But because they are present it should be possible to treat," he said.
For their study, the authors collected human scalp tissue -- both bald and haired -- discarded during hair transplant procedures performed on 54 white men who were 40 to 65 years old.
A complex series of analyses revealed that bald and haired tissue contain equivalent amounts of preserved stem cells, which give rise to progenitor cells. Bald tissue, however, did not contain the normal amount of progenitor cells, suggesting a malfunction in the normal behavior of hair follicle stem cells.
"The follicles that make hair don't go away completely, but they become miniaturized, to the point where the hair they normally make to replace hair when it naturally falls out becomes microscopic and therefore invisible," Cotsarelis said.
There are still just as many stem cells in the bald scalp that can make hair as there are in the normal haired scalp, and that was an important and surprising finding, Cotsarelis said
"It caused us to ask, 'If that is the case, why isn't the hair there?'" he said. They found that the progenitor cells, which have the job of making thick hair, are in short supply when baldness occurs "because the stem cells are for some reason blocked or incapable of making these progenitor cells," he said.
Their discovery, reported Jan. 4 in the Journal of Clinical Investigation, might someday lead to new targets for treatment of baldness, which affects millions of people worldwide, they say.
"Now that we have identified the problem we can try to better understand how to get a stem cell to make and activate a progenitor cells. And then we should be able to develop new ways of treating baldness," Cotsarelis said.
Vicki Kalabokes, president and CEO of the National Alopecia Areata Foundation, concurs. (Alopecia areata is a condition that causes round patches of hair loss.)
"There's still a long road ahead here," she cautioned. "But until now it had not been proven that this sort of stem cell defect was perhaps the problem. So this could certainly open up an avenue for future explorations looking into to how to correct this defect."
However, those hoping for a treatment anytime soon will have to wait. "Taking something from the lab to the clinic often takes decades, so there's no treatment around the corner," Cotsarelis cautioned. "It's really going to take quite a while to figure this out."

Read the original article in the Journal of Clinical Investigation

For more information on how to treat hair loss today, visit http://www.baumanmedical.com