Merck & Co. and GlaxoSmithKline Plc (GSK)’s drugs for hair loss and enlarged prostate will carry new U.S. warnings about a low risk of being diagnosed with a more serious form of prostate cancer.

The Food and Drug Administration revised the prescribing information for Merck’s Proscar and Propecia and Glaxo’s Avodart and Jalyn based on the findings of two studies, the agency said today in a statement. From 2002 to 2009 about 5 million men were prescribed one of these drugs, known as 5-ARIs, including almost 3 million men ages 50 to 79, the FDA said.

This surprised me, and I asked Otis Brawley, chief medical officer of the American Cancer Society and a prostate cancer doctor himself, what he thought. Brawley wrote back:

Merck has been working with the FDA to update the PROSCAR labeling based on findings from the Prostate Cancer Prevention Trial (PCPT), an independent trial conducted by the Southwest Oncology Group.

The PCPT trial showed that treatment with PROSCAR significantly reduced the risk of prostate cancer overall compared to placebo. The trial also showed a slight, but significant, proportion of high-grade (more serious) cancer among some men treated with PROSCAR. PROPECIA was not included in the trial. Patients should talk with their doctor before they stop taking any of their medicines.

The ISHRS (International Society of Hair Restoration Surgery) invited a keynote speaker (expert urologist) a few years back to the Annual Scientific Meeting when the prostate research was initially published.  His opinion was the same as the CMO, Otis Brawley / American Cancer Society... shrinking normal tissue made the smaller, more rare aggressive prostate cancer easier to find on biopsy and this resulted in the increase in the reported findings in the clinical trial. Keep in mind that the same studies showed that mild to moderate prostate cancers decrased by up to 30% in patients on Proscar. --Dr. Alan Bauman

What is Acell Matristem for Hair Transplants?

Acell/Matristem is an FDA-cleared ECM (Extracelluar Matrix) wound-healing powder from porcine (pig) bladders.  ECMs provide a framework for wound healing cells so there's less inflammation, less scar tissue formation and overall better tissue regeneration. Eventually, Acell/Matristem is replaced and/or absorbed leaving 'normal-ish' tissue behind. The healing when ECM is used results in tissue that is more similar to normal skin and less like a scar.  Public interest exists because a few people grew their fingers back (check youtube, Oprah, Dr. Oz, etc.) after near amputation.

ECM's are useful because they improve healing in hair transplant procedures in the donor area--especially FUE, making the healed donor area even less detectable. Some patients seem to be confusing this observation with hair cloning. I've observed that wound healing when using ECM (there are a variety of them by the way) is impressive. It is NOT a miracle "hair cloning" breakthrough, however.

In a research study performed at Bauman Medical Group in 2010, Acell/Matristem was tested in the FUE donor area. Below is the comparison of the donor area at 24 hrs (top) and 7 days (bottom). On the left side of the photo, Humatrix Gel was applied.  On the right side Humatrix Gel and ACell/Matristem powder was used.  Upon causal observation, wound healing in the ACell+Humatrix side (right) was more advanced at 24 hrs and also resulted in visually stronger hair growth in the surrounding non-harvested follicles at 7 days compared to the Humatrix only side (left). 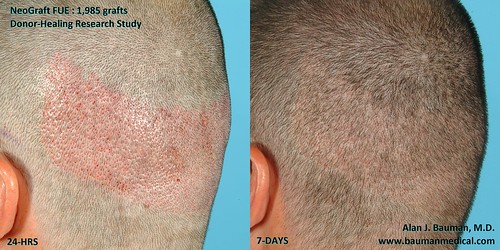 From a patient's point of view, cosmetically… if there is no visible scar, is this the same as "no scar?"

In my patient-education materials and in my Informed Consent paperwork for FUE hair transplant patients, I have preferred the phraseology of "no linear scar," and avoided the use of the terms "no scar," "scar free," or "scarless" over the years when discussing the benefits of FUE hair transplants.  Additionally, in the Informed Consent, we also include very close-up magnified photos of a healed FUE donor areas so patients know that there is a limit as to how short they can buzz their hair and still keep their harvested areas undetectable.

Our discussion of whether FUE is a 'scar-free' hair transplant continues on http://www.fuehair.net