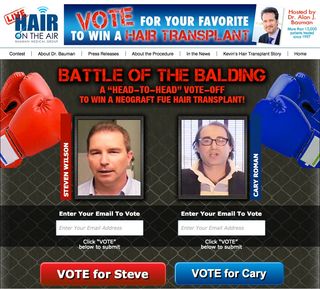 Boca Raton, Florida (August 21, 2013) – Help one man overcome baldness and regain a full head of hair. From now through Labor Day weekend (September 2nd 2013), the public is asked to vote for one lucky winner in Dr. Alan J. Bauman’s “Battle of the Balding” championship at www.LiveHair.TV/contest. The prize, worth $5,000, is a free state-of-the-art NeoGraft FUE hair transplant.

The two lucky “Battle of the Balding” contest finalists are Cary Roman, 48, an event promoter and Steve Wilson, 49, a facility planner. Both men are from South Florida.

Wilson and Roman entered the contest after hearing about it from Kevin Rolston, the front man on a top rated morning radio program, the “Kevin, Jason, Virginia” Show that currently airs on 97.3 FM The Coast in Miami. In July last year, after complaining publicly about his hair loss for more than 13 years, Rolston became a recent member of Bauman’s “Follicle Fan Club” after receiving a minimally-invasive NeoGraft FUE hair transplant procedure from Bauman that was broadcast live via the Internet to a global audience of more than 75,000 viewers from 22 countries. Rolston gained national notoriety throughout the radio broadcast industry as the first disc jockey to undergo a live NeoGraft FUE hair transplant on the air. His surgery was “broadcast” to three different media entities simultaneously, including live streaming audio that could be heard by his South Florida fans and also video that played on the stations’ website real-time.

Bauman’s contest, which coincides with August’s National Hair Loss Awareness Month, is being promoted via all major social media outlets including Facebook, Twitter and Google+ and is using #BattleoftheBalding for trending.  To watch the two contestant videos, learn more about hair loss options, vote for your favorite to win and share this contest with others, go to www.LiveHair.TV/contest

“My goal with this contest is to raise awareness about the causes of and treatments for hair loss,” said Bauman, medical director of the Bauman Medical Group. “More than 80 million men and women suffer from hair loss in this country, but it’s important to remember that baldness and thinning are now treatable conditions. Early intervention is key, as well as utilizing a multi-therapy approach as prescribed by a qualified hair restoration specialist. For patients who need the ultimate weapon in the battle against baldness, artistically performed NeoGraft FUE is the top choice. This minimally invasive, no-stitch/no-scalpel follicular unit extraction transplant creates a full, natural-looking hairline with zero risk of linear scarring and little downtime.”

Bauman has treated more than 15,000 hair loss suffers since 1997 and is considered one of the world’s top medical experts on hair loss, having been regularly featured in the country’s leading print, radio and television media.

According to Bauman, who medically clears all patients prior to their procedures, both men’s hair loss symptoms are classic.  “The combination of Cary’s and Steve’s age, along with possible hereditary, environmental and lifestyle factors, all tend to lead to the extreme hair thinning and areas that are hard to cover. Having been medically cleared, both men are absolutely ideal candidates to get results from the most technologically advanced, minimally invasive and virtually undetectable hair transplant procedure that I personally perform in my clinic on a daily basis.”

This is the state-of-the-art hair transplant procedure that Bauman has become world-famous for performing. Using the most sophisticated technology, the NeoGraft FUE device allows Bauman to artfully harvest and transplant individual living and growing hair follicles with faster recovery and no tell-tale linear scar.  Value: $5,000

The contestant videos and voting is available at: http://www.LiveHair.tv/contest

Dr. Bauman received his M.D. degree from New York Medical College and surgical residency training at Mt. Sinai Medical Center and Beth Israel Medical Center in New York.  Dr. Bauman is one of approximately 100 physicians worldwide to achieve certification from the esteemed American and International Board of Hair Restoration Surgery.  He has been an active member of the International Society of Hair Restoration Surgery as a participant and lecturer at numerous Annual Scientific Meetings and Live Surgery Workshops.

Dr. Bauman is an author of textbook chapters on the science of hair care and hair transplantation, including eyelash transplant surgery, and has been extensively featured in the world’s leading media as a medical expert and successful early-adopter of some of the most advanced technologies in the treatment of hair loss such as laser therapy and NeoGraft FUE hair transplantation.

Dr. Bauman has been featured extensively in the world’s leading media in print, radio and television as a medical expert and successful early-adopter of the most advanced technologies in the treatment of hair loss. Appearances, interviews and profiles include the Today Show, The Early Show, Good Morning America, Extra, Access Hollywood and Dateline NBC among other TV appearances. Newspaper and Magazine articles and feature stories include The New York Times, Newsweek, Cosmo, Vogue, Allure, O – The Oprah Magazine and Men’s Health among others.